TV zombie fungus highlights real world threat of fungal pathogens
Hit TV show The Last of US follows on from an outbreak of a fictitious fungi, but Imperial experts are among those battling very real fungal diseases.
Health - Life Sciences - 24.01.2023
Tackling infections that pass from animals to humans
The next generation of scientists will be better able to predict, detect and control viruses that jump from animals to humans thanks to major new funding.
Life Sciences - Health - 24.01.2023

Researcher instrumental in introduction of new elephant care standards
New rigorous welfare standards developed by Professor Christine Nicol, Professor of Animal Welfare at the Royal Veterinary College, in collaboration with the animal protection charity, We Are All Mammals (WAAM), have been introduced in facilities across Southern Africa.
Health - Life Sciences - 06.01.2023

Silencing the symphony of one of the most biodiverse rainforests on the planet
New study measuring biological sounds reveals how palm oil and teakwood industries contribute to deforestation and threaten wildlife in Costa Rica. A recording captured in one of Costa Rica's expansive rainforests floods my ears: the steady drip of humidity from verdant plants, the caws of vibrant toucans, the signature screeches from howler monkeys that can be heard from miles away; if I close my eyes, I can nearly feel the swoosh of air from these creatures as they soar and swing in lush trees above.
Health - Life Sciences - 12.12.2022

Prostate cancer risk prediction algorithm could help target testing at men at greatest risk
Cambridge scientists have created a comprehensive tool for predicting an individual's risk of developing prostate cancer, which they say could help ensure that those men at greatest risk will receive the appropriate testing while reducing unnecessary - and potentially invasive - testing for those at very low risk.
Life Sciences - Event - 09.12.2022

Feature: The ’historic’ Alzheimer’s breakthrough that is 30 years in the making
UCL's Professor Sir John Hardy was the first to identify the role of amyloid in Alzheimer's disease - now, three decades later, that finding has resulted in a drug that may help patients. In newly published trial results, a drug has for the first time been shown to slow the rate of cognitive decline in people with Alzheimer's disease.
Environment - Life Sciences - 02.12.2022

Sequencing project to unleash the biotechnology potential of single-celled algae
An ambitious plan to sequence the genomes of all known species of euglenoids over the next decade has been launched today.
Life Sciences - Health - 22.11.2022
Major project to unlock secrets of ageing well
A €1. Million project, being led by Dr Esther Walton, will advance understanding about brain ageing and its links to wellbeing and mental health.
Life Sciences - Environment - 17.11.2022

Students win gold for a design that turns a pollutant into a soil nutrient
Life Sciences - Innovation - 17.11.2022
The RVC’s London BioScience Innovation Centre expands provision to Tribeca development
The London BioScience Innovation Centre (LBIC) - founded in 2000 and owned by the Royal Veterinary College (RVC) - will open a new 37,127 sq.
Health - Life Sciences - 16.11.2022
My work investigating the links between viruses and Alzheimer’s disease was dismissed for years - but now the evidence is building
This article is part of the Insights Uncharted Brain series. There are many competing theories about what causes Alzheimer's disease.
Health - Life Sciences - 14.11.2022

Investment, Power and Protein in sub-Saharan Africa
SCI Lecturer Jeremy Brice published a new report examining financial investment in protein production in sub-Saharan Africa for TABLE.
Health - Life Sciences - 03.11.2022
New consortium to tackle monkeypox outbreaks
Researchers will join the UK-s leading research institutions as part of a new consortium to tackle monkeypox. The new UKRI-funded consortium will work to develop better diagnostic tests, identify potential therapies and study vaccine effectiveness and the spread of the virus. Led by the Pirbright Institute and the MRC-University of Glasgow Centre for Virus Research , it brings together 25 leading researchers and scientists from 12 institutions across the UK, funded by £2 million from the Biotechnology and Biosciences Research Council (BBSRC) and the Medial Research Council (MRC).
Life Sciences - Health - 28.10.2022

Opinion: Coronavirus origins - the debate flares up, but the evidence remains weak
Where did the Covid-19 virus originate, in nature or in a lab? Writing in The Conversation, Professor Francois Balloux (UCL Genetics Institute) takes a look at a recent, un-peer-reviewed preprint paper claiming to have found evidence that it was created in a lab.
Health - Life Sciences - 27.10.2022

£5 million gift to create the Hodge Centre for Translational Neuroscience
Astronomy / Space Science - Life Sciences - 21.10.2022
Observing the early universe and supporting net-zero: News from the College
Here's a batch of fresh news and announcements from across Imperial. From an international mission to search for the cosmic origins of the universe , to a framework for evaluating greenhouse gas emissions , here is some quick-read news from across the College.
Health - Life Sciences - 20.10.2022 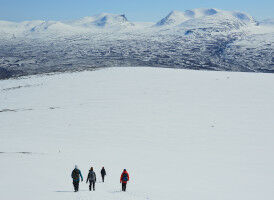 Q&A: Helping the BBC film bumblebees in the Arctic
For the BBC's latest landmark natural history series, Frozen Planet II, Dr Richard Gill helped the production team find and film Arctic bumblebees. Dr Gill and his team have been studying the ecology of bumblebees in Abisko, in Swedish Lapland, for several years. But in 2021 he and PhD candidate Aoife Cantwell-Jones had an extra assignment - helping the BBC film the bees' behavior for a segment in Frozen Planet II.
Life Sciences - Health - 04.10.2022

Wheelchair fencing and epilepsy medication: News from the College
Here's a batch of fresh news and announcements from across Imperial. From a system developed by students to detect rule-breaking in wheelchair fencing , to research into effect of anti-seizure medication on birth defects , here is some quick-read news from across the College. Monitoring wheelchair fencing Students from Imperial have attended the Wheelchair Fencing World Cup in Italy to test a pressure monitoring system that detects rule-breaking in the sport.
Health - Life Sciences - 30.09.2022
Traumatic brain injury ’remains a major global health problem’ say experts
A new report highlights the advances and challenges in prevention, clinical care, and research in traumatic brain injury, a leading cause of injury-related death and disability worldwide.
Health - Life Sciences - 23.09.2022
Reusable contact lenses more than triple risk of rare preventable eye infection
People who wear reusable contact lenses are nearly four times as likely as those wearing daily disposables to develop a rare sight-threatening eye infection, finds a study led by UCL and Moorfields researchers.
Health - Life Sciences - 23.09.2022