Meteorites reveal likely origin of Earth’s volatile chemicals
Meteorites have told researchers the likely far-flung origin of Earth's volatile chemicals, some of which form the building blocks of life. They found that around half the Earth's inventory of the volatile element zinc came from asteroids originating in the outer Solar System - the part beyond the asteroid belt that includes the planets Jupiter , Saturn , and Uranus.
Astronomy / Space Science - Chemistry - 24.01.2023
Space collaboration including Sussex scientist makes icy discovery which sheds light on the building blocks of life
In a development believed to shed light on the building blocks of life, an international team of scientists, including Prof Wendy Brown from the University of Sussex, has discovered diverse ices in the darkest, coldest regions of space so-far measured, which are around 500 light years from Earth. The discovery within a molecular cloud was made by scientists from the IceAge project, an international consortium of academics using the James Webb Space Telescope (JWST), to observe the building blocks of life.
Astronomy / Space Science - Physics - 12.01.2023
Astronomical collaboration maps the structure of our Galaxy’s magnetic field
Almost a decade after starting observations of the sky in the northern hemisphere in the microwave range, the QUIJOTE Collaboration has presented the most accurate description we have of the polarisation of the emission of the Milky Way at these wavelengths. This is a window of observation not previously explored, which provides complementary information to that obtained previously by space mission (Planck and WMAP) dedicated to the study of the cosmic microwave background radiation (CMB), the fossil radiation left behind by the Big Bang.
Astronomy / Space Science - 06.01.2023

’little hurricanes’ to weigh and date planets around young stars
Little -hurricanes- that form in the discs of gas and dust around young stars can be used to study certain aspects of planet formation, even for smaller planets which orbit their star at large distances and are out of reach for most telescopes. It's extremely difficult to study smaller planets that are far away from their star by directly imaging them: it would be like trying to spot a firefly in front of a lighthouse.
Astronomy / Space Science - Innovation - 20.12.2022
Science and Engineering: a review of our top stories
2022 was another packed year for news from the Faculty Science and Engineering. From dinosaurs, to robots and amazing students to distant stars, here are some of our highlights: Palaeontologists working on the Ichthyosaur skeleton found at Rutland Water August 26 2021 Matthew Power Photography www.matthewpowerphotography.co.uk 07969 088655 matthew@matthewpowerphotography.co.uk @mpowerphoto In January we kicked the year off with a colossal story.
Physics - Astronomy / Space Science - 19.12.2022

How magnetic waves interact with Earth’s bubble
A new study involving UCL has uncovered how magnetic waves are transmitted past a standing shock wave, known as the bow shock, that forms ahead of Earth as a result of the solar wind hitting our magnetic bubble (magnetosphere). Shock waves occur in air when a plane travels faster than the speed of sound and also occur in plasma (a fourth state of matter that makes up 99% of the visible Universe) in space.
Astronomy / Space Science - Physics - 09.12.2022

Mysteriously bright flash is a black hole jet pointing straight toward Earth, astronomers say
Astronomers have determined the source of an incredibly bright X-ray, optical and radio signal appearing from halfway across the Universe. The signal, named AT 2022cmc, was discovered earlier this year by the Zwicky Transient Facility in California. Findings published today in Nature Astronomy, suggest that it is likely from a jet of matter, streaking out from a supermassive black hole at close to the speed of light.
Astronomy / Space Science - Physics - 28.11.2022

Non-detection of key signal allows astronomers to determine what the first galaxies were - and weren’t - like
Researchers have been able to make some key determinations about the first galaxies to exist, in one of the first astrophysical studies of the period in the early Universe when the first stars and galaxies formed, known as the cosmic dawn.
Astronomy / Space Science - Physics - 24.11.2022

Shock waves trigger black holes’ powerful jets
Powerful jets of material released by black holes are accelerated far into space by shock waves within the jets, an international collaboration involving UCL researchers has found. The study, published in Nature , helps to solve a decades-old mystery about how these jets are produced. The research team was able to rule out alternative causes of the jets - such as magnetic reconnection - and, out of a number of theoretical models of how the particles in the jets are accelerated, showed that just one model was correct.
Astronomy / Space Science - Physics - 22.11.2022

Worldwide dataset captures Earth in finest ever detail
A global open-source dataset of high-resolution images of Earth - the most extensive and detailed of its kind - has been developed by experts led by UCL with data from the European Space Agency (ESA). The free dataset, WorldStrat, will be presented at the NeurIPS 2022 conference in New Orleans. It includes nearly 10,000km² of free satellite images, showing every type of location, urban area and land use from agriculture, grasslands and forests to cities of every size and polar ice caps.
Astronomy / Space Science - 14.11.2022

Study of ’polluted’ white dwarfs finds that stars and planets grow together
A team of astronomers have found that planet formation in our young Solar System started much earlier than previously thought, with the building blocks of planets growing at the same time as their parent star. Some white dwarfs are amazing laboratories, because their thin atmospheres are almost like celestial graveyards Amy Bonsor A study of some of the oldest stars in the Universe suggests that the building blocks of planets like Jupiter and Saturn begin to form while a young star is growing.
Physics - Astronomy / Space Science - 03.11.2022
Magnetism could help explain Earth’s formation
A peculiar property of the Earth's magnetic field could help us to work out how our planet was created 4.5 billion years ago, according to a new scientific assessment. There are several theories about how the Earth and the Moon were formed, most involving a giant impact. They vary from a model where the impacting object strikes the newly formed Earth a glancing blow and then escapes, through to one where the collision is so energetic that both the impactor and the Earth are vaporized.
Astronomy / Space Science - Physics - 03.11.2022

Magnetised dead star likely has solid surface
A signature in the X-ray light emitted by a highly magnetised dead star known as a magnetar suggests the star has a solid surface with no atmosphere, according to a new study by an international collaboration co-led by UCL researchers. The study, published in the journal Science , uses data from a NASA satellite, the Imaging X-ray Polarimetry Explorer (IXPE), which was launched last December.
Astronomy / Space Science - 27.10.2022 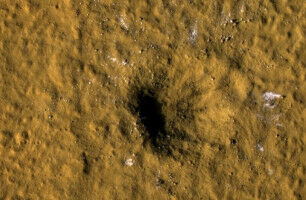 Epic meteoroid impact on Mars
NASA instruments have detected a Mars meteoroid impact that left a crater one and a half times the size of Trafalgar Square. It is the largest crater-forming impact ever observed in the solar system. The van-sized space rock weighed 200 tonnes and produced a blast zone around the crater equivalent in size to the area inside London's M25 motorway.
Earth Sciences - Astronomy / Space Science - 24.10.2022
Science sleuths solve century-old mystery of Martian meteorite’s discovery
A toxin which makes pigs vomit is the surprising key which has unlocked the century-old mystery of the origins of a Martian meteorite, and the possible identity of the Black student who discovered it. In 1931, an unusual stone stored in the geological collection of Purdue University in the USA was identified as a pristine example of a meteorite - a piece of space rock blasted from the surface of Mars millions of years ago before being pulled into the Earth's atmosphere.
Physics - Astronomy / Space Science - 17.10.2022

This Sussex Life. Physicist Prof Xavier Calmet: ’I’m glad I didn’t listen to my father.’
Physicist Professor Xavier Calmet describes how the ill advice of his father sent him on a journey to black holes - and a scientific breakthrough. I had a telescope in the back yard when I was a child . It was enough to dream, to look at the stars and wonder what could be out there. I had a broad interest in science, but I always thought it was so beautiful to watch the stars and to realise that we were so little and there's so much out there that we don't understand.
1 2 3 4 5 ... 31 Next »